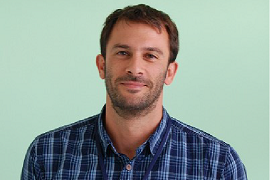 Associate Scientist at the Bioinformatics Department

The Cyprus Institute of Neurology and Genetics

2001 - 2002          Imperial College of Science, Technology and Medicine. Department: School of Biological Sciences.
MSc in Computational Genetics and Bioinformatics. (MSc was completed with a distinction).

01/02/03 - 30/09/03          Research assistant at the Department of Bioinformatics, Institute of Molecular Biology and Biotechnology, Foundation for Research and Technology Hellas, under the supervision of Dr. Yiota Poirazi.

Early research interests focused on the improvement of classification algorithms for the successful analysis of microarray expression data obtained from cases with varying pathological conditions or different grades of cancer. He implemented machine-learning algorithms and applications, which aim to aid in the diagnosis of complex genetic diseases such as cancer, by providing supplementary information to compliment classical clinical, histopathological and existing genetic information available today.
Dr Oulas also pursued research in the field of microRNAs (miRNA). His work in this field entailed the computational prediction of novel human miRNA genes and their targets residing within cancer associated genomic regions (CAGRs).
In addition, Dr Oulas has been involved in research related to the development as well as the application of bioinformatics tools and software for the specific analysis of bacterial diversity using genomic and metagenomic data.
With the advent of Next Generation Sequencing (NGS) and the increasing need for analysis of transcriptomic and genomic data derived from these technologies, Dr Oulas shifted his focus to analysis tools used specifically to address RNA-Seq, whole exome and genome sequencing data. He is involved in numerous ongoing projects involving germline variation detection and annotation and is mainly focused in the classification of variants of unknown or uncertain significance in association with specific diseases.
Other interest involve making use of already implemented pipelines as well as modifying and setting up new procedures and methodologies for the analysis of NGS data specifically to address variation detection and annotation.

Dr Anastasis Oulas is a postdoctoral researcher in Bioinformatics Group at The Cyprus Institute of Neurology and Genetics. He was drawn by the rapidly evolving field of computational analysis of biological data from the very start of his academic career. Having completed a BSc in Molecular Genetics at Sussex University (UK), his interests turned to computing and the implementation of mathematical algorithms for deciphering the enormous amount of information retrieved from large-scale biological experiments. He enriched his knowledge within this field by completing a MSc in Computational Genetics and Bioinformatics at Imperial College (UK). He then moved to the Foundation of Research and Technology, Hellas (FORTH) in Crete, Greece, where he conducted research that led to the attainment of his PhD in Computational Prediction of Gene Classifiers and miRNAs in Cancer. Prior to his current position, Dr Oulas has held three postdoctoral positions at the Bioinformatics laboratory of the Division of Medicine, the RNA laboratory, both affiliated with the University of Crete, as well as the Institute of Marine Biology, Biotechnology and Aquaculture (IMBBC), Hellenic Centre for Marine Research (HCMR).
Dr Oulas has participated in numerous European projects and has hands-on experience in project management and work package coordination. Dr Oulas is the currently the Cyprus representative in the EU-COST programme, EPITRAN (European Epitranscriptomics Network). He serves as a reviewer and has editorial duties for several scientific journals. He has organized several scientific conferences, mostly at the national level, and has contributed towards lectures for numerous conferences and workshops both locally and abroad. He has also received an A.G. Leventis Foundation Grant/Fellowship for postgraduate studies, based on academic excellence (2004-2006).